Tim Berners-Lee invented the World Wide Web in 1989, but it was not until 1994, when Mosaic released Netscape Navigator to the public, that knowledge began to acquire a new shape.  Originally a place to retrieve information, the web has become an open, social, space where everyone can contribute content.  With the web, knowledge is just a few digital steps away.

In the book Too Big To Know, Weinberger (2011) describes a symbiotic relationship between the web and knowledge, which he refers to as the networking of knowledge.  The net’s structure enables knowledge, and knowledge enables the net’s structure.  Free from curators and boundaries, the web retains content indefinitely, and does not impose limitations on its quantity or quality.  Creating knowledge is a social endeavor.  And, the web connects a large and diverse group of people.

In this new epistemology, do organizational leaders need to alter their view of knowledge? 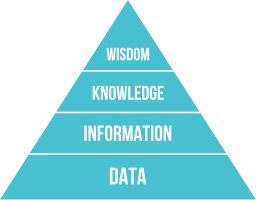 The idea behind the hierarchy is that each level is the meta of the previous one.  Information is meta-data.  Data are facts: it rained one inch on Tuesday in New York City.  Information connects facts: if it rains three days in a row in New York City, umbrella sales skyrocket.  Knowledge is meta-information: don’t buy an umbrella in New York City, you can probably pick one up on the subway, people leave them behind all the time.  Wisdom is meta-knowledge: you can’t stop the rain from falling.

Ackoff (1999) proposed that knowledge is the application of data, and Davenport, De Long, and Beers (1998) asserted that knowledge is the cornerstone of organizational decisions and actions.  Weinberger (2010) pointed out that this applied view of knowledge came from the desire to obtain business value from data.  This is the context in which Knowledge Management—a system designed to help organizations create, share, and use knowledge effectively—was created.  Unlike the open and social shape of the net, the style of Knowledge Management started out closed and hierarchical.

In a three-part blog, Nancy Dixon (2009) describes three eras of Knowledge Management—where it came from, where it went, and where it is going.  The first era—leveraging explicit knowledge—began around 1995.  Knowledge was viewed as competitive advantage, an asset for leaders to manage.  Organizations created internal repositories to facilitate the sharing of knowledge and to connect people to content.  Leaders focused on ensuring that the “best” knowledge was both captured and utilized.  The main failing of the first era was that it did not consider the fluid, infinite nature of knowledge, or its reliance on context.

The second era—leveraging experiential knowledge— began around 2000.  This era focused on connecting people to people, and using people’s experience to build communities that learn and perform faster.  Central to this era was the belief that front line workers were the real connection to knowledge.  The problem is, information flow between front line workers is mostly tactical and horizontal, and the model did not capture vertical information flows.  Leaders pondered their role in overseeing experiential learning communities, and looked for ways to create vertical flows.  They also recognized the model’s failure to address the growing complexity of organizations.

Dixon (2009) is more optimistic than Davenport, indicating that Knowledge Management’s third era—leveraging collective knowledge—strives to meet the needs of today’s complex and connected world.  As Jarche (2010) pointed out, modern organizations face an environment of constant change and a market that values intangibles.  In the third era, which began around 2005, Knowledge Management moved out of the  knowledge hierarchy and into a collective, constructivist model; a model that tackles organizational complexity and adaptive challenges by connecting employees to decision makers.

As it turns out, leveraging collective knowledge to deal with adaptive challenges means using the network to create knowledge.  The keys to the third era, according to Dixon (2009), are accepting cognitive diversity, integrating knowledge, and ensuring transparency.  These three keys are also the hallmarks of Weinberger’s network of knowledge.  It appears there is hope for Knowledge Management after all.

Thankfully, there are a myriad of web-based tools to help manage information and knowledge.  My university uses LinkedIn to recruit employees and cloud-based systems like ADP and Salesforce to manage people and relationships.  Virtual employees attend meetings via web tools like Skype and VSee, and students from all over the world use the Internet to connect to our learning management systems.  Employees and students alike use tools like Office 365, Google Docs, OneNote, and YouTube to manage information.

Knowledge Management is not dead, it just had to reinvent itself for the networked age.  Leaders need to do this, too.  Jarche (2010) advises leaders to focus on strategy, gain understanding of the web, leverage social media for problem solving, and teach people how to work effectively in this new environment.  In a network of knowledge connections, leaders must be connectors.

Dixon, N. (2009, May 2). Where knowledge management has been and where it is going- part one [blog post]. Conversation Matters. Retrieved from http://www.nancydixonblog.com/2009/05/where-knowledge-management-has-been-and-where-it-is-going-part-one.html

Dixon, N. (2009, July 30). Where knowledge management has been and where it is going- part three [blog post]. Conversation Matters. Retrieved from http://www.nancydixonblog.com/2009/07/where-knowledge-management-has-been-and-where-it-is-going-part-three.html

Jarche, H. (2010, February 24). A framework for social learning in the enterprise [blog post]. Retrieved from http://jarche.com/2010/02/a-framework-for-social-learning-in-the-enterprise/

17 thoughts on “Knowledge and Management. Making the Connection.”